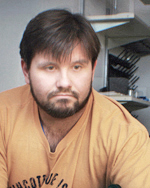 The NIBIB Section on Biophotonics develops probes and techniques for use in diffraction limited and sub-diffraction limited fluorescence imaging of cells and tissues. Major emphasis is placed on developing new and improving existing genetically encoded fluorescent proteins for use as markers and sensors. Methods and technologies include confocal, TIRF, and wide-field microscopes, single-molecule imaging, fluorescence spectroscopy, and protein engineering.

My lab uses these techniques in several collaborative studies including imaging of virus-infected cells to determine viral and host protein localizations at various times after infection. We are also using these techniques to study the precise localizations within the Golgi apparatus of the enzymes involved in sugar modifications. And we are comparing the localization of sodium phosphate transporters with the localization of proteins thought to be involved in their cellular transport in route to determining the mechanisms of how the transporters are up regulated or down regulated depending on serum phosphate levels.

Photo-activated localization microscopy (PALM) and other molecular localization techniques are based on imaging of single fluorescent molecules. This is followed by determining their localization with high precision by fitting their fluorescent signal to a function, such as a two-dimensional Gaussian, which gives the coordinates of the molecule. The imaging of single molecules requires the ability to distinguish those molecules in a much larger population, so the density of the spots must be relatively sparse. This can be done in several techniques depending on the fluorophore and how the sparse population is maintained. For PALM and a similar technique Fluorescence-PALM (F-PALM) developed by Sam Hess and colleagues, photoactivatable and/or photoconvertible fluorescent proteins which are switched from an off state to an on state or from one wavelength to another respectively, were initially used. For Stochastic Optical Reconstruction Microscopy (STORM), PALM with Independent Running Acquisition (PALMIRA), and Direct STORM (dSTORM), photoswitchable dyes and photoswitchable fluorescent proteins are the usual probes. My lab currently has a home-built system capable of imaging up to three colors of photoactivatable, photoconvertible, or photoswitchable probes for localization in both lateral and axial dimensions.

In addition, we have recently incorporated into the PALM microscope mentioned above a new structured illumination microscopy technique developed by our colleagues in the Section on High Resolution Opitcal Imaging. Multi-focal structured illumination microscopy (MSIM) is based on exciting fluorophores with an array of diffraction-limited spots, collecting images of these spots at ~1 pixel increments until the entire field of view is sampled, and processing the images by scaling and deconvolution to produce an ~ 2-fold improvement in resolution. Importantly, MSIM achieves this 2-fold improvement in resolution while imaging at depths up to 50 µm in cells and tissues.

Another microscope constructed in my lab is an even illumination multi-angle total internal reflection fluorescence microscopy. Here, the beam is focused at the back focal plane and moved around the periphery at a position which maintains TIRF excitation but leads to a more evenly illuminated specimen by averaging of the excitation spot. This requires image exposures long enough to collect emission resulting from excitation as the evanescent wave propagates from all directions. We can also couple this with excitation at multiple angles to allow excitation and imaging at different depths of the specimen.