NIBIB funded bioengineers have developed a swallowed device that attaches to the stomach wall and painlessly injects a therapeutic dose of insulin. The technology aims to simplify daily delivery of insulin and other protein drugs.

Injections of insulin, often several times a day, is life-saving for diabetics but is a difficult and painful regimen to adhere to. For years, researchers have worked to create a technology to allow diabetics to take insulin orally. However, because the stomach digests and deactivates proteins like insulin, delivering the insulin orally while avoiding digestion has been a formidable challenge.

Now, an MIT and Brigham and Women’s Hospital (BWH) led research team has developed a swallowed capsule that painlessly injects insulin into the stomach wall, where it is absorbed into the system.

Says David Rampulla, Ph.D., director of the NIBIB Division of Discovery Science and Technology, “The group has developed a number of approaches focused on oral delivery of non-protein medications, as well as sensors that are able to detect and send a signal indicating the existence of disease. In this current work they have overcome a number of obstacles with innovative engineering to allow the protein drug, insulin, to be successfully administered through the stomach in a pig model.”

“We developed a small pod-like device that incorporates the features needed to protect insulin from digestion but then also successfully delivers the insulin through the muscular stomach wall into the circulatory system,” explained senior co-author of the study Giovanni Traverso, an assistant professor at Brigham and Women’s Hospital, Harvard Medical School, and a visiting scientist in MIT’s Department of Mechanical Engineering.

The shape of the small pod was one of the keys to the successful design. It was inspired by the shape of the leopard tortoise, whose roof-peak-like top and flat bottom allow it to easily roll and right itself if turned over. The engineers used the shape to build a capsule that, after arriving in the stomach, rolls until it stops upright with the flat surface against the stomach wall. 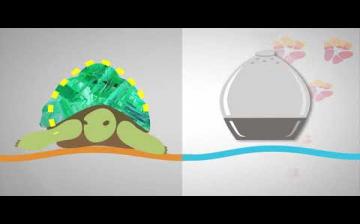 With the capsule successfully landed on the stomach surface a second engineering innovation was needed to get the insulin it carries through the muscular stomach wall—a spring-loaded needle made of compressed freeze-dried insulin. The insulin needle was attached to a spring coiled inside a disk made of sugar. After landing in the stomach, water dissolves the sugar releasing the spring that pushes the needle of insulin through the stomach wall where it dissolves into the circulatory system.
Tested in a pig model, the technology successfully delivered enough insulin into the animal’s circulation to lower blood sugar to levels that are achieved by standard injection through the skin.
The team is working with the company Novo Nordisk to optimize the manufacturing of the capsule on a large scale. The team is optimistic that the technology will not only change the lives of millions of diabetics worldwide but will also be adaptable to carry other protein medications that have to be injected, such as immunosuppressants used to treat autoimmune disorders including arthritis, skin diseases, and inflammatory bowel disease.
The study was reported in the February issue of Science1. The work was a collaborative effort including the Massachusetts Institute of Technology, Harvard Medical School, Brigham and Women’s Hospital, and Novo Nordisk.
Funding was provided by the National Institute of Biomedical Imaging and Bioengineering grant EB000244, Novo Nordisk, a National Science Foundation Graduate Research Fellowship, Brigham and Women’s Hospital, a Viking Olaf Bjork Research Scholarship, and the MIT Undergraduate Research Opportunities Program.
1. An ingestible self-orienting system for oral delivery of macromolecules.Abramson A, Caffarel-Salvador E, Khang M, Dellal D, Silverstein D, Gao Y, Frederiksen MR, Vegge A, Hubálek F, Water JJ, Friderichsen AV, Fels J, Kirk RK, Cleveland C, Collins J, Tamang S, Hayward A, Landh T, Buckley ST, Roxhed N, Rahbek U, Langer R, Traverso G. Science. 2019 Feb 8;363(6427):611-615. doi: 10.1126/science.aau2277.
Program Area
Delivery Systems and Devices for Drugs and Biologics
Integration of Implantable Medical Devices
Bionic Systems
Division
Division of Discovery Science & Technology (Bioengineering)