Taking the sting out of diabetic testing

NIBIB-funded researchers at the Massachusetts Institute of Technology and their collaborators at the University of Missouri School of Medicine have developed a non-invasive device that could potentially be as effective at measuring blood glucose levels as the standard finger prick. The majority of diabetics currently monitor the amount of glucose in their blood by pricking themselves multiple times a day and using a portable glucometer. They must then dispose of the biological material and sharp needle in a safe way. Because the current system is both painful and inconvenient, research to develop noninvasive ways to track blood sugar levels throughout the day accurately has been ongoing for decades. The number of diabetics is increasing yearly and it is estimated that by 2035, there will be 592 million people worldwide affected by some form of diabetes.

Peter So, Ph.D., Professor of Mechanical Engineering and Biological Engineering at MIT and his team have found a way to use a technique called Raman spectroscopy to measure the level of blood sugar by simply shining a laser onto a patient’s skin and detecting different components in the skin that can analyze the amount of the glucose. Spectroscopy is a technique that measures different aspects of matter by observing how it reacts with light. In this case, when the researchers calibrate the system to track the change of glucose, it is able to detect the specific molecular bonds of glucose and creates a sort of molecular finger print that can provide an accurate measure of blood sugar levels. 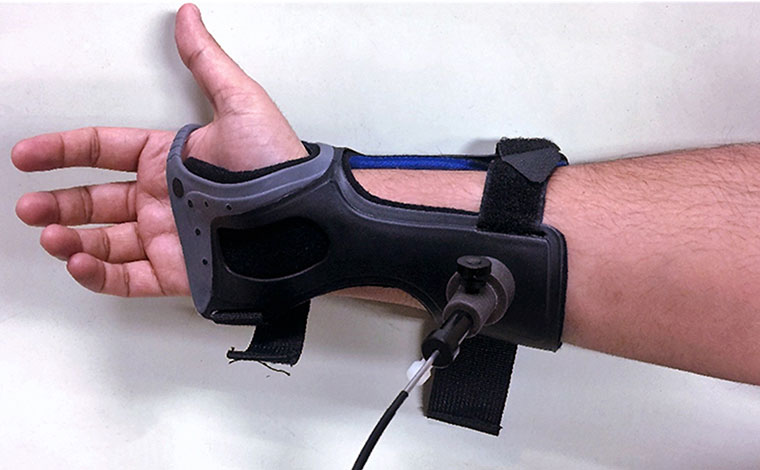 Jeon Woong Kang, Ph.D., research scientist with MIT’s Laser Biomedical Research Center and his team paired the method of Raman spectroscopy with computer models to optically analyze the blood just under the skin of 20 healthy volunteers. They developed a brace that held a fiberoptic laser in place to monitor the same area of skin over the course of three hours as the subjects underwent oral glucose tolerance testing (OGTT). OGTT is a common test used to diagnose diabetes. It requires patients to ingest a drink high in sugar very quickly after which doctors periodically test their blood to make sure that the insulin response is normal. The researchers also tested the volunteers’ blood with intravenous tests and finger prick tests. After the calibration using OGTT data, their new method was as accurate as the finger prick tests over a period of time. This team is working on extending the length of this period up to a few days. Intravenous testing is still the gold standard and the most accurate way of testing blood sugar levels. The results of this trial showed that it is still more accurate than the new laser monitoring. However, the intravenous testing is invasive and requires medical personnel, and is therefore not a viable option of continuous blood sugar monitoring for the vast majority of diabetics.

“With the rapid increase of diabetes in the population, the need for an accurate and noninvasive glucose monitoring system is becoming critical,” said Behrouz Shabestari, Ph.D., director of the NIBIB program in Optical Imaging and Spectroscopy. “This development shows how pairing computer modeling with existing technology could provide new answers to old questions.”

While the current system is too bulky to be a realistic alternative to the finger prick test, Kang and his team are optimistic that with further research and development, they can adapt this technology to be portable, convenient, and personalized.