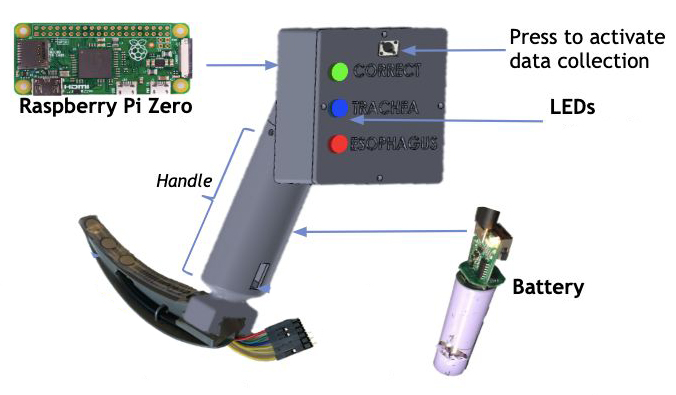 Intubations are often performed by non-expert healthcare workers outside of the operating room such as emergency medical technicians or residents and can fail as often as 49% of the time, which can cause hypoxia, hypotension, and even death. The team from Columbia University, New York City, developed a tool to help make intubation easier by providing the user with feedback that informs them when they are incorrectly pushing the tube into the trachea or esophagus. Limited testing has shown that it significantly decreases the amount of time it takes a novice to correctly intubate, and greatly increases the chance that they will be successful on their first try.

The current tests for CDI take more than an hour, require a trained lab technician, and are costly. More than 90% of those tests will be negative. C. Differently developed a test that produces results within five minutes. Since it is cheaper, sensitive, paper-based, portable, and does not require expertise, it can be used as a screening tool to rule out CDI—reducing the number of tests performed with traditional methods and lowering costs for hospitals and patients. 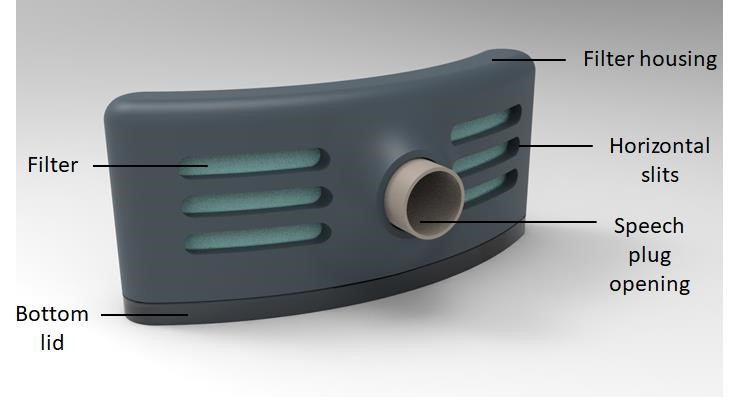 A tracheostomy involves cutting an opening in the neck where a tube can be inserted to allow air to go into the trachea and reach the lungs of patients who experience difficulty breathing.  While this procedure allows patients to breathe on their own, it also prevents them from being able to speak since most of the air from the lungs goes out through the tracheostomy tube and cannot drive the vocal cords into vibration. Another major problem is that patients suffer from an excess of mucus buildup in the throat because they are breathing in dry air that has bypassed the normal pathway through the nasal cavity that regulates its humidity. The attachment developed by the students combines a filter that captures humidity (reducing mucus) and a plug that blocks exhalation and enables the patients to speak. It is designed so the patient can switch back and forth easily between the two functions. The device is also re-usable.

Scalpel injuries are the second most common injury in the operating room and put healthcare workers at risk for connective tissue damage and bloodborne illnesses such as HIV. Injury can occur during scalpel blade attachment, use, handoff, blade removal, and disposal, all of which are times when the scalpel blade is fully exposed. ScalPal is a new packaging for scalpel blades that will help to eliminate sharps injuries and reduce exposure to bloodborne diseases, such as HIV, while attaching and removing disposable scalpel blades from reusable scalpel handles.

More than 250,000 women in the United States suffer from neurogenic bladder—a condition in which bladder control is compromised. The solution to this is to use a catheter four to six times a day to void the bladder. However, females often face difficulty locating the urethra and inserting the catheter correctly. This can result in social embarrassment and urinary tract infections (UTIs). The Cath Path features a vaginal insert that aligns the catheter guide with the urethra and helps women insert the catheter without assistance. 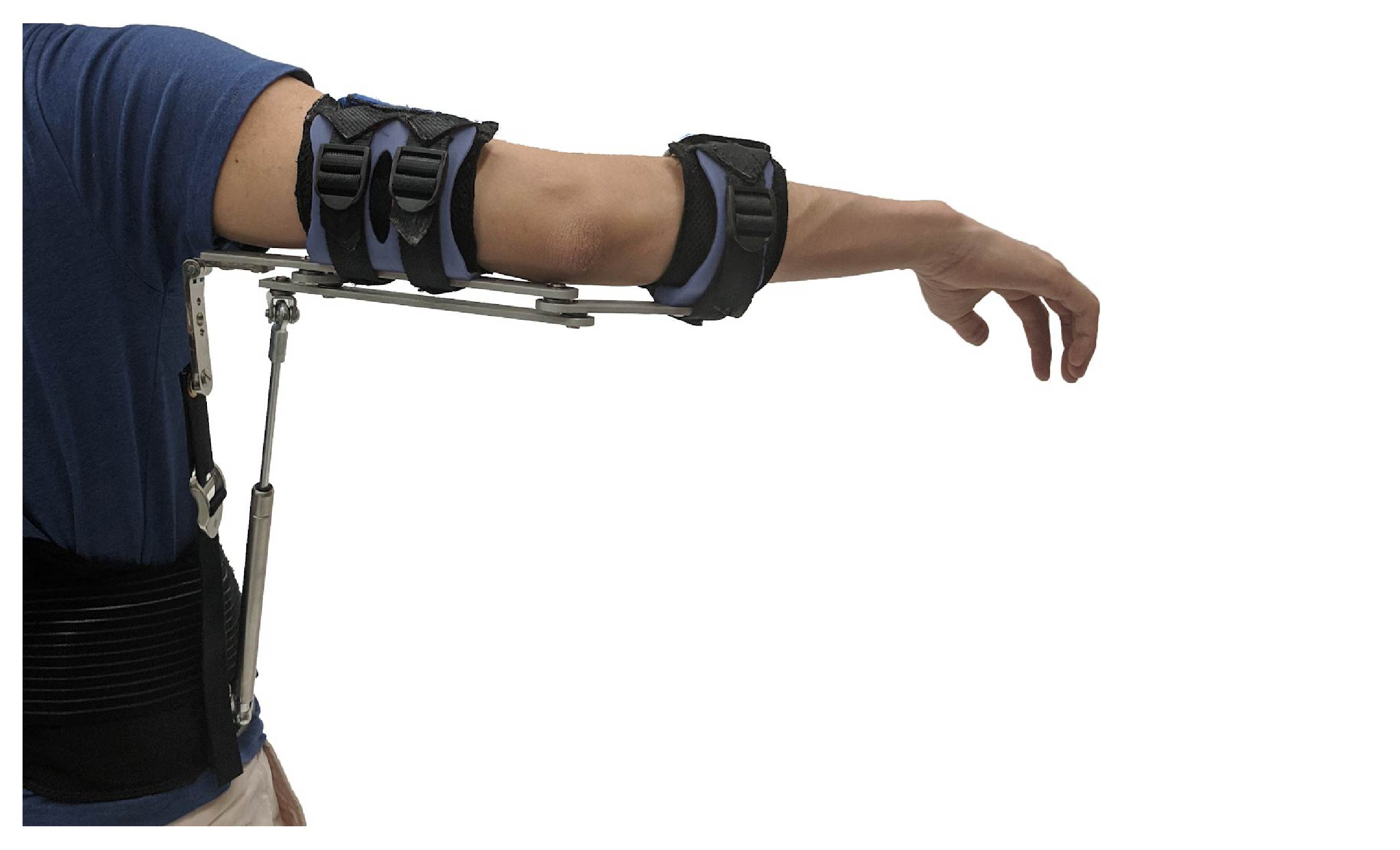 Medical arm exoskeletons are used to support a user’s arm against the load of gravity. They can be used for medical reasons, such as stroke patients who need extra support, or by professionals performing delicate or repetitive motions for long periods of time such as doctors. Currently available exoskeletons are either fully supportive or compact, but not both. The Axexo was designed to be compact enough to be worn under a shirt while still supportive enough that the user’s arm feels nearly weightless as they perform tasks.

Infection in peritoneal dialysis is one of the primary reasons why nephrologists do not recommend patients for PD. This device utilizes a novel technology system to reduce the risk of infection in peritoneal dialysis care. It disinfects a potentially contaminated PD tube ends in a closed system to eliminate the harmful consequences of touch contamination events. This will allow more kidney failure patients to receive quality care at home.

Post-operative ileus is the severe reduction in GI motility seen after major abdominal surgery, making it an expected complication that poses additional difficulty to post-operative care. POI affects up to 10% of major abdominal surgery patients, with the condition also seen following other forms of surgery such as joint or cardiovascular procedures. Research suggests that postoperative ileus is founded upon a disruption to normal electrical activity in the gut, and that corrective electrical stimulation applied to the right location in the gut can act as a pacemaker signal to restore those patterns of activity. This device is an ingestible electronic capsule to safely deliver several hours of stimulation to the small intestine during its passage through the GI tract. This one-use pill propels itself through the GI tract by directly stimulating muscle contractions, thereby delivering stimulation to the entire small intestine.

Cerclage cables are used to reduce femur fractures by passing cables around longitudinal fractures and securing it to the bone. To complete such a procedure, cerclage passers are used to tunnel around the bone and soft tissue to provide a clear pathway for the cable. The passers only complete a half circle around the bone, leaving the distal end of the passer embedded in the soft tissue, requiring surgeons to place undue torque on the device and trauma to the soft tissue to find the end. The Apollo is a cerclage passer that creates a three-quarter loop around the bone to provide easy visualization for the surgeon to pass the cable through in the retrograde direction, decreasing the average surgical time per cable and patient soft tissue trauma.

The Hera Bra for Detection of Subclinical Mastitis in Breastfeeding Mothers, Columbia University

Mastitis is inflammation of the breast tissue due to milk stasis or bacterial infection. Mastitis is reported in up to 33% of lactating mothers, yet is often undiagnosed until symptoms become severe. As a result, many mothers experience both severe physical pain as well as the emotional distress that arises from the inability to breastfeed. The Hera Bra and Hera Mobile Application will detect subclinical mastitis prior to the onset of systemic symptoms. The instrumented bra detects contralateral breast temperature fluctuations and alerts mothers of anomalous trends.

In the United States, over 26,500 peritoneal dialysis (PD) patients are at risk for developing peritonitis, an infection of the peritoneum. The OpticLine would be able to detect peritonitis earlier than the current standard of care, thus reducing acute hospitalization costs and improving PD longevity. The OpticLine accomplishes this goal by analyzing the optical density of white blood cells in the dialysis effluent to gauge for infection occurrence. This hands-free device only requires a one-time setup and will attach to the drainline of the current PD system to allow for real-time infection detection during a PD session.