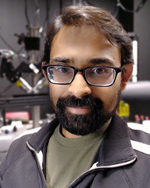 Dr. Harshad Vishwasrao received his BA in physics and mathematics in 1997 from the University of Pennsylvania. He then did his PhD (2005) with Watt Webb at Cornell University, where he used two-photon microscopy and ultrafast time resolved anisotropy to study the conformational dynamics of the intrinsic fluorophore NADH in the brain as a function of metabolic activity. Taking a detour into neuroscience, he took positions as first a post-doctoral fellow and then a research scientist with Eric Kandel at Columbia University. His interest in the plasticity induced remodeling of the synapse lead him to develop two fluorescence microscopy techniques. The first was a homo-FRET/polarization based approach to quantitatively image the actin polymer fraction in live cells. The second was a method of iterative multiplex imaging using selectively chemically cleavable immunoprobes.

Dr. Vishwasrao joined the NIH in 2016 as the co-Operating Director of the Advanced Imaging and Microscopy Resource.