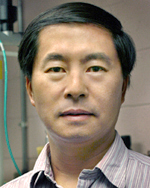 Dr. Lang received his B.S. in Radiation Chemistry from the University of Technology of China in 1983; a Master of Science in Radiochemistry from the Shanghai Institute of Nuclear Research in 1986; and his Ph.D. in Radiopharmaceutical Chemistry from the University of Missouri-Columbia in 1992. He began his NIH career as an international fellow in the Clinical Center PET Department in 1992, and accepted a staff scientist position in 1998. Dr. Lang joined NIBIB in October 2004 when the Clinical Center Radiochemistry Section was realigned and became an organizational component of NIBIB’s Intramural Science Program.