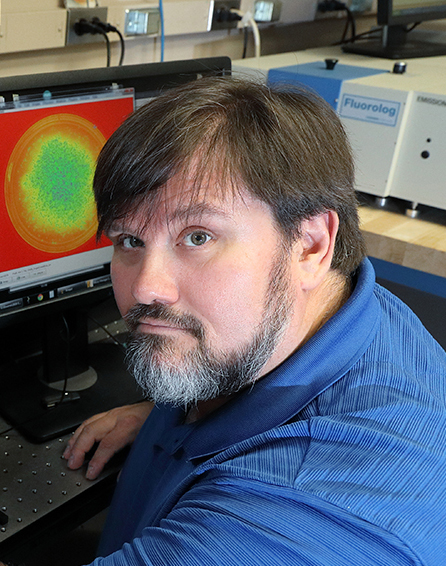 George Harold Patterson, Ph.D., was a Senior Investigator in NIBIB, where he served as Chief of the Section on Biophotonics. George’s research focused on the development of probes and techniques for diffraction limited and sub-diffraction limited fluorescence imaging of cells and tissues. These approaches have included photo-activated localization microscopy (PALM); other molecular localization techniques based on imaging of single fluorescent molecules; and multi-focal structured illumination microscopy (MSIM) techniques, which are based on exciting fluorophores with an array of diffraction-limited focused beams, followed by image processing to improve spatial resolution.

George’s career started with his bachelor's degree from the University of North Alabama (Florence, Alabama) in 1992, which included a biology research project on the reproductive cycle of a freshwater mussel, Cyclonais tuberculata. In 1993, George was accepted into the Interdisciplinary Graduate Program within the Vanderbilt School of Medicine, Vanderbilt University, Nashville, Tennessee, where he joined the lab of Prof. David Piston in the Department of Molecular Physiology in 1994. George was awarded a PhD in 1999 for his study of glucose metabolism in pancreatic islets of Langerhans, which incorporated quantitative fluorescence imaging using fluorescent proteins. He then accepted a post-doctoral position in the laboratory of Dr. Jennifer Lippincott-Schwartz in the Cell Biology and Metabolism Branch, in the intramural program of the National Institute of Child Health and Human Development, where he developed reagents and techniques for fluorescence imaging in the study of secretory protein trafficking. Four years later, he accepted a staff scientist position in Jennifer’s laboratory, where he continued work in protein trafficking. During this time, George collaborated with Dr. Eric Betzig, Dr. Harald Hess at the Howard Hughes Medical Institute, Janelia Farm, and the team developed the new PALM fluorescence imaging technique. George’s work on photoactivatable genetically encoded proteins made an important contribution to the work that led to Dr. Eric Betzig’s Nobel Prize in Chemistry in 2014.

In late 2009, George accepted an Investigator appointment in the National Institute of Biomedical Imaging and Bioengineering, where he worked on the development fluorescent proteins, as well as on super-resolution imaging techniques for use in cell biology. While in NIBIB, George made major contributions to create both novel and improved genetically encoded fluorescent proteins for use as markers and sensors. His approach utilized structure-based mutagenesis followed by spectroscopy and imaging characterization of the variants. His broad range of technique development included multi-photon excitation microscopy, confocal microscopy, total internal reflection fluorescence (TIRF) microscopy, wide-field microscopy, single molecule imaging, fluorescence spectroscopy, and protein engineering.

Notably, George created a friendly laboratory with a high degree of trainee diversity. George will be greatly missed by his colleagues in NIBIB and around the NIH. George is survived by his wife Susanne Neumann, and children Isabella (11) and Max (9).

The NIBIB Section on Biophotonics develops probes and techniques for use in diffraction limited and sub-diffraction limited fluorescence imaging of cells and tissues. These include Photo-activated localization microscopy (PALM) and other molecular localization techniques which are based on imaging of single fluorescent molecules and Multi-focal Structured Illumination Microscopy (MSIM) which is based on exciting fluorophores with an array of diffraction-limited spots followed processing to achieve an approximately 2-fold improvement in resolution.  Major emphasis is placed on developing new and improving existing genetically encoded fluorescent proteins for use as markers and sensors.  This approach utilizes structure based mutagenesis followed by spectroscopy and imaging characterization of the variants.  Methods and technologies include multi-photon excitation microscopy, confocal microscopy, total internal reflection fluorescence (TIRF) microscopy, and widefield microscopy, single molecule imaging, fluorescence spectroscopy, and protein engineering.