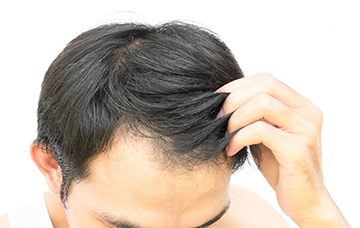 Low-frequency electric stimulation shows promise as a possible alternative to medications for restoring hair growth in people whose hair has begun to thin. Engineers at the University of Wisconsin-Madison, with support from the National Institute of Biomedical Imaging and Bioengineering (NIBIB), have designed an unobtrusive, wearable electric stimulator that can regenerate hair growth. They demonstrated its effectiveness with laboratory rats and with nude mice, a species that has a genetic defect that affects hair growth. The outcome of the study is encouraging enough that the team plans to test the technology in people soon.

In their paper recently in ACS Nano, a team lead by Xudong Wang, Ph.D., professor of Material Sciences and Engineering in the College of Engineering at the University of Wisconsin-Madison, found that rats outfitted with electric stimulation devices produced longer and fuller hair than those treated with topical medication. The devices also promoted regeneration of hair on the skin surface of nude mice, including an increase in hair follicles. The researchers noted that secretion of two hair growth factors became activated in the nude mice.

Wang heads an NIBIB-funded research project that explores technologies for harvesting energy from body dynamics—from limb movement to chest expansion—to power devices such as pacemakers, without the need for batteries. Other devices he has recently developed are an implant that stimulates the stomach for weight loss and an electric bandage for wound healing. Each device is composed of ultrathin, lightweight, stretchable and biocompatible polymer membranes that convert energy from the body. The hair regeneration device is positioned against the skin surface and collects energy from the wearer’s random body motions. It sends gentle electric pulses as far as four millimeters into the skin to achieve a therapeutic effect.

People have two kinds of hair follicles. One type covers the skin of the body and generates fine, pigment-free hairs. Another type produces long, thick hair—about 100,000 follicles of this hair type are found on our scalp. They are subject to phases of growth and rest, with some hairs being lost and other shafts forming every day. These follicles are influenced during the lifespan by hormones called androgens, which play a role in regulating hair growth and follicle deactivation. Though all the mechanisms are not fully understood, researchers have shown that electric stimulation can induce hair growth by stimulating follicles that are phasing out to become reinvigorated, possibly through regulation of multiple hair growth factors in the scalp. Similarly, researchers have used electric stimulation to enhance bone and soft tissue repair.

The team’s wearable electric stimulation device was able to stretch and move freely with the animals’ activities and was sufficiently durable to function during an extended time. A postage-stamp size portion of the device kept contact with the skin for the duration of the two-week experiment. It collected a consistent voltage of electricity, generated from the animals’ regular daily body movements. That source of electricity supplied the electric potential for stimulation.  The technology was at least as effective in the rats as two anti-baldness medications. The researchers found that rats had higher hair follicle density and longer hair shaft length than those treated with medications.

The researchers say that their device could quickly evolve into “a practical and facile solution” to address the hair loss problem suffered by billions of people all over the world. When translated to human use, the low-profile device is redesigned to be worn under a baseball cap. They note that the device does not generate new hair follicles from smooth skin, rather reactivates follicles that have gone dormant. The researchers have patented the device and are planning to test it with people soon.

The study was supported in part by the National Institutes of Health, including NIBIB (EB021336) and the National Cancer Institute (CA014520).