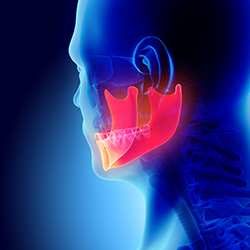 A team led by Rice University bioengineers with support from the National Institute of Biomedical Imaging and Bioengineering (NIBIB) used bone engineered in a shape defined by a 3D-printed mold and grown alongside the ribs of sheep to successfully replace a portion of the animals’ jaw bones. The researchers hope to develop the tissue regenerative procedure for human application so that craniofacial injuries could be treated with bony tissue grown alongside natural bone rather than removing bone from elsewhere in the body for grafting and implantation.

“Restoring bone structure lost to injury or disease is an important target for tissue engineering research,” said Šeila Selimović, director of the NIBIB program in Technologies for Tissue Chips, Engineered Tissues, and Biosensors and Physiological Detectors. “The research applies a complex process that makes innovative use of biomaterials and tools such as 3D printing to generate bony tissue for jaw reconstruction.”

The human jaw sustains repetitive force while biting and chewing a varied solid-food diet. Sheep use similar biomechanics to macerate feed pellets and hay. A set of muscles connected to bone work in combination, pivoting the lower jaw—or mandible—up and down and from side to side. When injury or disease causes jaw damage and tissue loss, bone implants are sometimes required to reconstruct the jaw, which must be able to replicate this hard-working anatomical structure.

A multi-institution team, led by bioengineer Antonios Mikos, Ph.D., the Louis Calder Professor of Bioengineering and Chemical and Biomolecular Engineering at Rice University and a director of the NIBIB-funded Center for Engineering Complex Tissues, performed the sheep study based on the team’s vision of a process, called biomaterials-aided mandibular reconstruction. Among the team are members from the University of Texas Health Science Center at Houston.

“We have been gratified to contribute a regenerative solution for the potential treatment of craniofacial defects,” Mikos said. “This work is testament to the value of team science.”

In their study, published in the March 18, 2019, Proceedings of the National Academy of Sciences, the researchers created rectangular defects in the lower jaw of six sheep. They used a spacer, which temporarily preserved the shape of the jaw at the defect site, and produced 3D printed molds, called bioreactors, used to grow replacement bone tissue. They filled the bioreactors with either a biocompatible ceramic or with crushed bone, anticipating that each material would be a good medium for growth of replacement tissue.

The researchers implanted four bioreactors in each sheep, next to rib bones with exposed periosteum, a layer of vascularized connective tissue that surrounds bones. Bone tissue was then allowed to grow from the periosteum into the bioreactor during a period of nine weeks. After that time, the researchers removed the spacers from the lower jaws and implanted the bioreactor-grown tissue in their place.  Researchers found that the two materials grown in the bioreactors that were initially filled with either the ceramic or crushed bone were sufficient for implantation, however, the tissue grown from crushed bone had mechanical properties more similar to natural bone so they used these in the ultimate implantation procedure.

Twelve weeks after implantation of the bioreactor-grown tissues in the jaw, the researchers observed that the new bone knitted to the natural bone and that soft tissue grew to cover the wound site. The results demonstrated that viable bone tissue that could substitute for grafts taken from one’s leg, the current clinical procedure, could be made from bony materials grown with 3D printed bioreactors.