Scientists have greatly extended the amount of time human livers can be stored for transplantation by modifying a previous protocol to extend the viability of rat livers. Previously, human livers were only viable for an average of nine hours, but the new method of preservation maintains liver tissue for up to 27 hours, giving transplant doctors and patients a much longer timeframe to work with.

Like a glass container broken by frozen water, when cells freeze, they often experience irreparable damage. Since human cells are especially sensitive, donor livers are stored above freezing at 4 degrees Celsius. As a result, doctors can typically only preserve human livers for nine hours before the chances of a successful transplantation drastically decrease. This short time frame makes it more difficult, and sometimes impossible, to get the organs to compatible patients who are located farther away.

“Delivering viable organs to matching recipients within the window of viability can often be the most challenging aspect of organ transplantation,” said Seila Selimovic, Ph.D., director of NIBIB’s Engineered Tissues program. “By giving doctors and patients more time, this research could someday affect thousands of patients who are waiting for liver transplants.” 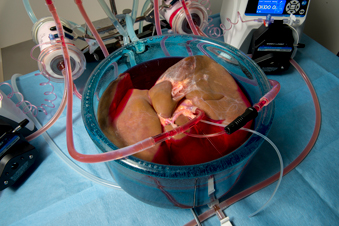 In previous studies funded by NIH, Martin Yarmush, Ph.D., director of the Center for Engineering in Medicine, Korkut Uygun, Ph.D., associate professor of surgery, and their collaborators at Massachusetts General Hospital (MGH), Boston, had developed new techniques that extended the time that rat liver (hepatic) tissue can be stored at subzero temperatures without damage. They were able to do this by adding a modified glucose compound, 3-OMG, and PEG-35kD—an ingredient in antifreeze—to the protective solution that they use to cool the livers. The PEG compound lowers the temperature at which the cells freeze and 3-OMG acts as a protectant against the cold. With these additions, they were able to cool the rat livers to 6 degrees Celsius without freezing them—a process called supercooling.

However, while the techniques worked with the rat livers in those earlier studies, it was unsuccessful when applied to human livers, which are 200 times larger. The size difference significantly increased the risk that ice crystals would start to spontaneously form (heterogenous ice nucleation), making the organ unusable for transplantation. In a paper published in Nature Biotechnology on Sept. 9, Reinier de Vries, M.D., a research fellow in surgery, Shannon Tessier, Ph.D.,  instructor in surgery at MGH and Harvard Medical School, Boston, and Uygun, and their collaborators at MGH detail three new steps to the protocol to avoid ice nucleation and preserve human livers for up to 27 hours.

“With supercooling, as the volume increases it becomes exponentially more difficult to prevent ice formation at sub-zero temperatures,” said de Vries. “Before, there were a lot of experts who said, ‘well this is amazing in small rats, but it will not work in human organs,’ and now we have successfully scaled it up 200 times from rat to human livers using a combination of technologies.”

The first step was to limit the contact of the storage liquid to air. When supercooled, the livers are submerged in the supercooling protective solution. The researchers found that the risk of ice crystals forming greatly increased in areas where the solution was in contact with air. To eliminate this risk, the scientists removed the air from the storage solution bag prior to supercooling, effectively eliminating the chance of spontaneous ice nucleation on the surface of the organ.

Next, the researchers included two additional ingredients to the protective solution to help protect the hepatocytes. The first additive, trehalose, helps to protect the cell as well as stabilize the cell membranes. The second, glycerol, supports the protective properties of the 3-OMG glucose compound added in the previous experiments. Both additives have been used in the cryogenic preservation of cells in the laboratory but had not been used in the preservation of organs for transplantation.

Finally, they developed a new method of delivering the preservation solution to the liver. The traditional method of delivery of the protective solution used in previous studies is to manually flush the preservation solution through the tissue. However, the new protective solution is thicker than the traditional solutions and can cause damage to the cell lining the inside of the blood vessels. In addition, the higher viscosity means that the solution is often not uniformly distributed throughout the organ, increasing the chance of ice nucleation spreading and freezing the liver. To combat this problem, the researchers used machine perfusion—a way of delivering oxygen and nutrients to capillaries in biological tissues while outside the body—at 4 degrees Celsius with the traditional protective solution. They then slowly lowered the temperature while increasing the concentration of the new protective additives. The staggered approach allowed the hepatic tissue time to adjust and the solution was able to spread throughout the organ more uniformly.

While the researchers have yet to implant a liver preserved using this new method into a human subject, traditional standards of assessing liver viability indicate that this process will not negatively affect the organ.

NIBIB’s mission is to improve health by leading the development and accelerating the application of biomedical technologies. The Institute is committed to integrating the physical and engineering sciences with the life sciences to advance basic research and medical care. NIBIB supports emerging technology research and development within its internal laboratories and through grants, collaborations, and training. More information is available at the NIBIB website: http://www.nibib.nih.gov.

The NIDDK, a component of the NIH, conducts and supports research on diabetes and other endocrine and metabolic diseases; digestive diseases, nutrition and obesity; and kidney, urologic and hematologic diseases. Spanning the full spectrum of medicine and afflicting people of all ages and ethnic groups, these diseases encompass some of the most common, severe and disabling conditions affecting Americans. For more information about the NIDDK and its programs, see http://www.niddk.nih.gov.

The National Institutes of Health, the nation's medical research agency, includes 27 Institutes and Centers and is a component of the U.S. Department of Health and Human Services. NIH is the primary federal agency conducting and supporting basic, clinical, and translational medical research, and is investigating the causes, treatments, and cures for both common and rare diseases. For more information about NIH and its programs, visit http://www.nih.gov.