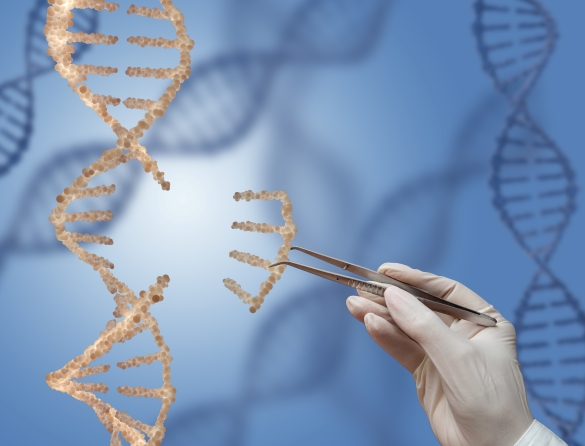 A longstanding aspiration of researchers and clinicians has been the ability to repair DNA in a living cell or organism, especially in human patients with genetic mutations that cause disease. Now, scientists with partial funding support from the National Institute of Biomedical Imaging and Bioengineering (NIBIB) at the Broad Institute of MIT and Harvard University are closer than ever to this goal. The researchers have designed a more precise and versatile genome editing system, named prime editing, that harnesses the power of CRISPR-Cas9 in combination with another protein, reverse transcriptase, to directly edit DNA in human cells.

“We’ve reached a new milestone in curing adult genetic diseases with this remarkable improvement upon the powerful CRISPR-Cas9 genome editing system,” says David Rampulla, Ph.D., director of the NIBIB program in Synthetic Biology for Technology Development. “This was an ambitious project, and I’m eager to see how scientists will use the new tool in basic research and the clinic.” The study published in Nature by David Liu, Ph.D., a Richard Merkin Professor at the Broad Institute of MIT and Harvard, and his team led by postdoctoral fellow Andrew Anzalone, Ph.D., reported 175 successful DNA edits using their prime editing. The pair thinks prime editing has the potential to correct about 89% of known disease-causing mutations in DNA.

In the classic CRISPR-Cas9 system, a guide RNA leads the Cas9 enzyme to a specific DNA site where it cuts both strands of DNA. After the cut, the cell recognizes the DNA has been damaged and will initiate one of several repair mechanisms. Scientists hijack the repair process and can introduce changes to targeted sites in the cell’s genome. However, the original CRISPR-Cas9 system is often inefficient at replacing the DNA bases properly and produces a mix of the correct and incorrect edited DNA products.

Of the three billion DNA bases in the human genome, devastating diseases can occur when only one letter of a cell’s DNA is incorrect. It is challenging to change just one DNA letter to a different letter using classic CRISPR-Cas9, but the prime editing technique may enable this change much more easily.

The team demonstrated the power of prime editing in human cells grown in a lab dish for the gene variants that cause sickle-cell anemia and Tay Sachs disease. In both cases, the technique edited the cells back to the correct sequence.

“If CRISPR-Cas9 and other programmable nucleases are like scissors that remove unwanted strings of DNA bases, a prime editor can be compared to a word processor, where one or more unwanted DNA bases in the genome are searched and then replaced,” described senior investigator Liu. Prime editing is made of up two components – one engineered protein and one engineered RNA. A deactivated Cas9 protein fused to an engineered reverse transcriptase enzyme forms the prime editor protein that is vital to this new technique.

The engineered guide RNA, called prime editing guide RNA (pegRNA), contains two key sequences – one that targets a specific DNA site in the cell’s genome and another that includes the desired edits to the cell’s genome. The pegRNA directs Cas9 to the target DNA site, where it nicks only one strand of DNA instead of cutting both strands. Then, the reverse transcriptase reads the

“Andrew Anzalone led this project and conceived the initial idea to incorporate the DNA edits directly into the guide RNA,” said Liu. From there, the team had to figure out the best way to transcribe the information efficiently and accurately into the DNA sequence. The researchers started the experiments in simpler yeast systems but a big hurdle they needed to overcome was achieving the edits in actual human cells. “I never thought I’d be excited about results that showed just a 3% editing success rate in human cells – but that’s when I knew our system would work after some optimization.” So far, the team reports about 20% to 50% efficiency rates after initial optimization.

In addition to improving efficiencies in human cells, the team is in the process of characterizing the possible ways prime editors may affect human cells. Also, the editing system was mostly tested using a widely used human cancer cell line, but researchers still need to test the prime editor’s compatibility with other human cell types. Lastly, to explore the technology’s potential for use in human therapeutics, delivery methods need to be optimized for work with live animals first.

Harnessing the power CRISPR-Cas9 techniques with novel approaches like this new editing tool will continue to push through the barriers of genetics research. “Each type of genome editing technology has its strengths and weaknesses and will have a role in basic research and human therapeutic applications,” said Liu. “Prime editing is highly versatile and produces fewer undesired gene products than other genome editing systems, making it valuable to the scientific community.”