Medical training reinvented with the help of a woman’s touch

Educator Carla Pugh, M.D., Ph.D., designs medical simulators rigged with sensors that provide a quantitative assessment of medical skills. Inspired at a young age by “healing” her toys, she pursued a B.S. at U.C. Berkeley in Neurobiology and her M.D. at Howard University School of Medicine. She describes herself as a visual learner who has difficulty not using her hands to learn a new skill. Early on in her medical training, she realized that there was a deficit in quantitatively measuring hands-on or “haptic” skills. Dr. Pugh sought to fill this gap in medical training and understood she needs to learn more about how to educate effectively first. She received her Ph.D. in Education from Stanford University and was the first surgeon to ever receive a Ph.D. in Education. Recently, she moved back to Stanford University where she became a Professor of Surgery at the School of Medicine and the Director of Technology-Enabled Clinical Improvement Center. 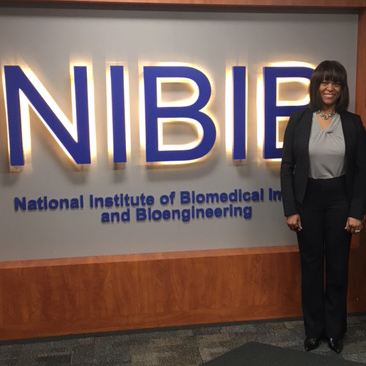 n Dr. Pugh’s 2014 TEDMED talk she narrated her experience during an emergency trauma with a medical resident who did not feel a blood clot in the heart of a patient. The patient is alive and well today because Dr. Pugh felt the clot herself and acted to remove it. Retrospectively reflecting on this event, Dr. Pugh asked herself, “Why didn’t the resident feel the clot when I did? Was the resident not pushing with enough force? Athletes get instant replay feedback, why don’t doctors have access to similar technology?”

“Simulation training is not used enough in the medical field and Dr. Pugh has dedicated her career to filling that gap,” said Grace Peng, Ph.D., director of the NIBIB program in Mathematical Modeling, Simulation, and Analysis.

As a grantee of the National Institute of Biomedical Imaging and Bioengineering for over ten years, Dr. Pugh has been working toward building new technologies to quantify haptic skills during medical training. Her research uses simulation and advanced engineering technologies to develop new approaches for assessing and defining competency in medical skills.

“She is an international expert on the use of sensors and motion trackers for performance measurement. Her work is an excellent example of how simulation can be used to generate measurable metrics for testing the medical skill performance of both expert and relatively inexperienced physicians,” said Dr. Peng.

Data for her research is collected using a combination of video and sensor motion trackers to quantify hands-on medical skills.

She declared, “Most of the clinicians want to know how their performance measures up to their peers.” Results from her breast exam simulators show that about 15 percent of clinicians do not apply proper force to feel a lesion in a routine breast exam. Next, she’s looking to apply wearable sensors at the point-of-care and directly on patients in place of mannequins.

“I have clinicians lining up by the hundreds at medical conferences to test their sense of touch performing routine exams like the breast exam,” exclaimed Dr. Pugh.

Dr. Pugh holds three patents on the use of sensor and data acquisition technology to quantify and distinguish medical skill performance. Currently, more than two-hundred medical and nursing schools are using one of her sensor-enabled tools for educating their students with hands-on performance training. Dr. Pugh received the Presidential Early Career Award for Scientists and Engineers from President Barack Obama in 2011.

Despite her numerous achievements already, Dr. Pugh feels she is still fighting for her greatest accomplishment. She thinks translating the data she has collected to the point-of-care arena and placing sensors on patients to collect real-time data will be her ultimate success. “It was essential for me to define the gold standard metrics for each of the different simulators I’ve built before moving to patients. By analyzing the data collected from hundreds of clinicians who performed the same exam on identical mannequins, I was able to develop a performance database,” emphasized Dr. Pugh. Now that she has set standards, it is time to move the sensors to the patients and collect real-time data. “I believe this will redefine medical training and accurately represent what it takes to care for patients,” she explained.

While conversing about the struggle for women in medicine and engineering, she noted that it’s not always helpful to focus on the negative. Dr. Pugh noted, “One of the biggest struggles women encounter is succeeding through the grant application process.” She further elaborated, “Evaluators have concluded that women are significantly less likely to apply for a research grant again after rejection.”

She encouraged everyone to follow Reshma Jagesi, M.D., from the University of Michigan and her work on gender equity in medicine and research. Dr. Pugh stated, “Dr. Jagesi is an excellent resource for navigating your way to success in a career in science and engineering as a woman.” Many people told Dr. Pugh along the way that her simulators wouldn’t matter, so her advice to emerging young women in science and engineering is “to never give up.”